From this summer Split will be easier to get to than ever thanks to the completion of the link road to the Zagreb freeway and to a new fast ferry line to Ancona, Italy.

The link road may go down in history as one of the most delayed construction projects ever having been started over a quarter of a century ago. To be fair, most of it is already in use, the two lane highway climbing from Solin on the outskirts of Split, up past the atmospheric castle of Klis to Dugopolje where it connects with the freeway to Zagreb (which will also eventually reach Dubrovnik in the other direction). All the tunnels and most of the bridges have been in place for some years, with many already in use, but problems between the Ministry of Transport and various contractors have meant that the final sections which will make it fully two lanes in each direction have been on hold for some time. Yesterday the Ministry announced that completion was on target for April. Hooray!

If water transport is more your thing, Italian ferry liner Snav will increase their service between Ancona and Split to daily from April to October and will put on a fast ferry service in July and August.

So what’s stopping you? Why not visit Split this summer? 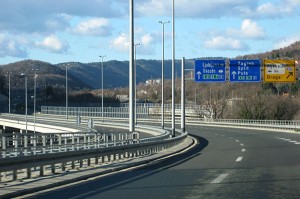